An Internet Power Switch (IPS) has been built for Mt Pleasant. Its main purpose is to provide remote and local control of power to a small cluster in the computer room. This can be operated from the front panel of the device or remotely via a terminal window. There are also several Remote Switches which plug into a wall socket and allow remote control of a single device via WiFi. Software on the IPS allows for control of these devices.

Note - external PSUs, RFoF PSU and counter have been removed from the ipspi1hb as of 20/4/2021 when the equipment was moved into the other rack.

dbbc3 is powered up directly from a separate UPS. We don't want to overload the system.

The front panel of the IPS consists of an Enable button and one button to control each of the 7 connected devices. There is a LED in each control button that indicates if power is on to the device. To avoid accidental toggling, the Enable button must be held on when controlling power to a device and released between button presses.

To turn power on/off to a device, hold down Enable and then press the button for the device you want to control.

The Raspberry Pi PC in the IPS can be accessed via VNC or on a terminal with ssh. The password is the usual one.

This starts a command-line interface that allows you to control power to devices. Type 'help' for a list of possible commands and 'help <command name>' for specific help on a command.

These are small power-socket mounted switches for remote control of whatever device is plugged into them. Once set up, the switch can be controlled locally via a button or remotely from the IPS via the Switch Interface software. The switches share information about their state with some server software on the IPS and can receive remote commands from the IPS too. Because the switches are designed to use the WiFi network intermittently, they check in with the server at regular (configurable) intervals to synchronise state information and process any pending commands. If a device is turned on or off locally after a remote (software) command has been sent, then the local operation takes precedence. Likewise, if the remote command is the most recent, it is executed at the next check-in.

The switches operate in two modes: setup and operating.

When turned on, the Switch will look for the WiFi network it was previously configured for and try to connect. The busy LED (orange) will flash and so will the WiFi LED (red). If it was not configured, or could not connect, it will start up as a WiFi access point which you can connect to and configure the switch (see below). This is indicated by a flashing busy LED and a solid WiFi LED.

If you hold down the button when you turn on the switch, it will enter setup mode regardless of the previous state. This is useful if you need to reconfigure the device. Hold down the button until you see the Busy LED (orange) flashing and the WiFi LED (red) on.

To keep RFI down, the switch can be configured to only turn its WiFi on when it does an update. To toggle between these modes, either hold down the button on the switch for more than 2 seconds or set the update interval in the SwitchInterface software to 0.

In this mode, the WiFi is off most of the time but the switch will connect at a specified time interval and do an update. This update interval can be configured in setup mode or via the SwitchInterface program.

In this mode, the WiFi is on all the time and the switch will attempt a status update with the server every 60s (by default) or whatever update time is specified when in setup mode. This is indicated by the WiFi LED being on at all times.

In setup mode, the switch configures itself as a WiFi access point with SSID “RR” followed by a string of numbers (e.g. RR4859390) which is the chip ID on the microcontroller. Connect to that network from a WiFi enabled device and you can configure the switch.

Once you've connected, you will see a new window like this on your browser: 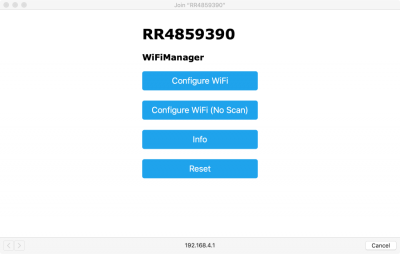 Choose “Configure WiFi”. You'll then see something like this: 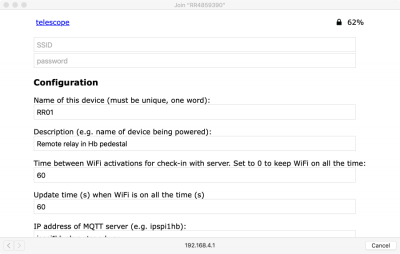 Select the network you want the switch to connect to from the list at the top of the screen and put in the WiFi password. Make any other configuration changes here too. NOTE: the Name of the switch, the address of the MQTT server (ipspi1hb in Hobart) and the update time when WiFi is constantly on (see below) can only be configured from this interface. Other items are remotely configurable from the SwitchInterface software.

The switch may be operated either locally or remotely.

Connect to ipspi1hb via VNC or ssh as above and start the Switch Interface. The status command gives the status of all known remote switches. Each device has a short name rather than a number, e.g. RR01, and this is the label to use when controlling it. A longer description of the device can be given with the remote_description command and this will be displayed in the status output.

The remote switch checks in with the IPS PC regularly. The interval between checks is configurable via the remote_interval command. To turn the attached device on, off, or to reboot it, use the remote_on, remote_off or remote_reboot commands respectively. The command will remain pending until the device checks in, when it will be executed. If however, the device is turned on or off locally after the command is issued, it will be ignored.

Hardware consists of a Raspberry Pi PC inside the IPS, connected to two relay boards for managing power switching and a custom-made circuit board primarily for managing input from front-panel buttons and displaying switch status on the panel.

Software running on the Raspberry Pi consists of four programs:

The Remote Switches have Arduino-compatible ESP8266 NodeMCU microcontrollers to manage a single relay switch. Each microcontroller runs software to manage the relay, WiFi connection, MQTT communication, a local button and some LEDs. When powered on it will connect to the local WiFi network if configured or start up as an access point if not, allowing a local connection for initial configuration (which is saved to non-volatile memory for next time). The software is in the Arduino directory, called RelayControl.ino.

hardware/irpi.pspihb.txt · Last modified: 2021/04/27 13:04 by Jamie McCallum
Except where otherwise noted, content on this wiki is licensed under the following license: CC Attribution-Share Alike 4.0 International